The Florida Department of Education released school grades for the 2018 -2019 school year on Thursday. Under the leadership of Addison Davis, Clay County has not only maintained its “A” rating, but improved in percent of total possible points earned. The District has improved its academic standing from 64 percent (“A”) to 66 percent (“A”), according to the Department of Education’s scale. Overall, Clay County District Schools ranks 8th in the state for total points earned and is tied for 7th in the state for percent of total possible points earned! 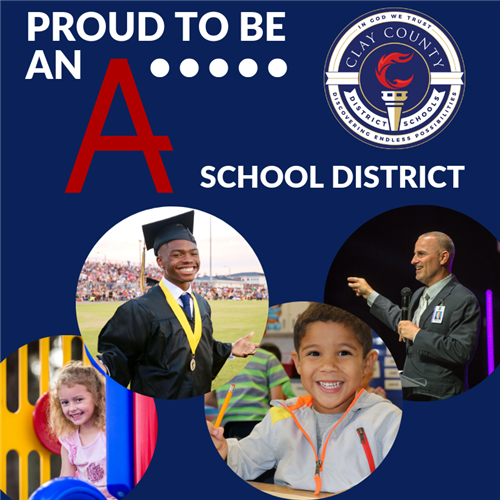 “I am ecstatic about the results released from the Department of Education. For a second year in a row, our teachers, leaders, support staff, district personnel, board members, and students have demonstrated their abilities to give best effort and create a world-class education in Clay County District Schools. I am appreciative for the opportunity to lead an amazing school district, and I will continue to work tirelessly on behalf of our children. Our mission continues to become the top school district in the state,” said Superintendent Addison Davis.

“I’m delighted at the progress that Clay County District Schools continues to make in academics. This is the first time since 2012 that the District has consistently achieved an “A” district rating. I look forward to assisting our school system in becoming the best school district in Florida,” said School Board Chair Carol Studdard.

The following are highlights from Clay County’s 2018-2019 results: